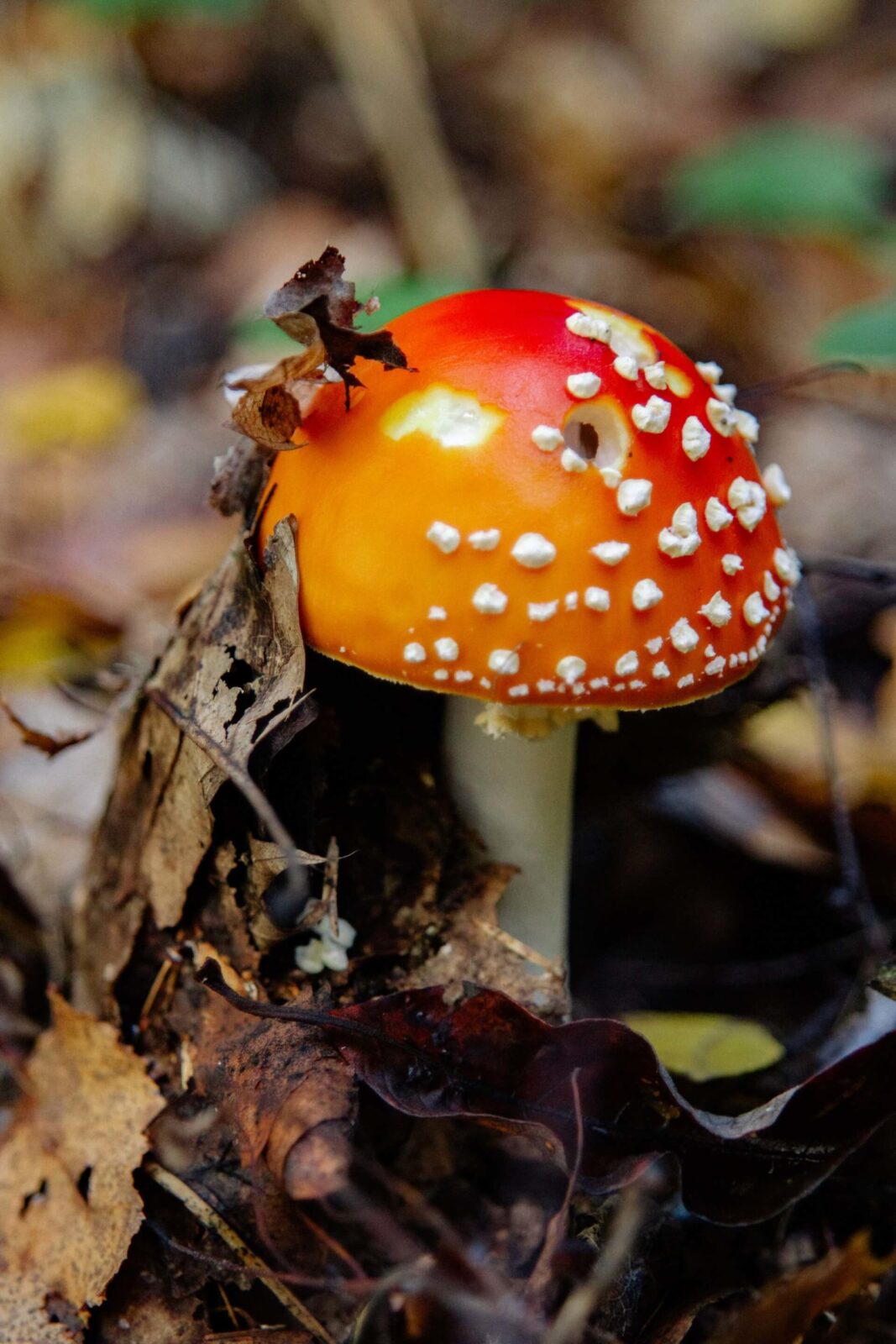 What Exactly Are Psilocybin Mushrooms And Therefore Spores?

Magic mushrooms are the most common name given to those that contain the psychoactive element psilocybin. These types of mushroom bodies are typically small, nondescript, gilled, and more often fit the description of “a little brown button capped mushroom”. Macroscopically, they are characterized by their small to occasionally medium size, brown to yellow- to golden brown varied coloration, with spore prints that range in color from rusty-brown, to lilac-brown, to dark purple-brown. Psychedelic species typically have a blue-staining reaction when the mushroom body itself is bruised. According to Wikipedia “Microscopically, they are characterized by pileipellis with hyphae that run parallel to the pileus surface, forming a cutis, by their lack of chrysocystidia, and by spores that are smooth, ellipsoid to rhomboid to sub hexagonal in shape, with a distinct apical germ pore.” Psilocybin mushrooms can be found growing on various kinds of decaying organic matter, most often known in fields with prevalent feces. But, contrary to popular belief only a few, such as P. cubensis and P. subcubensis, have been found to grow directly on manure. Many other species of psilocybin mushrooms are found in habitats such as mossy, grassy, or forest humus soils that have their needed humidity and weather conditions.

Although microscopic in size, psilocybin mushroom spores contain the blueprint for all mushroom growth. Or in other words, the spore of a mushroom contains all of the necessary materials to form a brand new fungus. A mature mushroom is said to contain up to 16 billion spores, giving Mother Nature and cultivators plenty of opportunities to propagate more. In Mother Nature, when the spores of a mushroom are released they often travel a certain distance before they land. The single cell then sends out hyphae (each of the branching filaments that make up the mycelium of a fungus) to help establish and gather food for the actual mushroom. After the spore has sent out its hyphae, they will eventually meet up with the hyphae of another mushroom. After the sexual process of reproduction has begun, the mushroom forms the structures of a “fruiting body” that will eventually produce and disperse spores.

How Psilocybin Mushroom Spores Are Collected

In regards to collecting your own psilocybin mushroom spores, all you need is a mushroom, paper, and glass. Carefully remove the stem from the mushroom and gently remove any skirt that may be present protecting the gills in the mushroom head. For the spore print all you need is the top of the mushroom with the gills exposed on the underside. Place the mushroom with the gills face down onto the paper and pop a glass over the top. For the next 24 hours leave the mushroom under the glass untouched. After that time period, remove the glass and gently lift the mushroom to reveal the microscopic magic. The spores will have fallen from the cap and you should see a print on the paper, which replicates the gill pattern from the mushroom. This beautiful display is the spore print which can then be used to grow your own mushrooms. Keep the print in a sealed bag in a cool, dry, dark place until you are ready to cultivate.

What Are Psilocybin Mushroom Spores Syringes?

What in the world are psilocybin mushroom spores syringes and how are they made exactly? Mushroom spore syringes are exactly what the words entail: a syringe filled with a sterile water solution (sometimes including a proprietary blend) that contains mushroom spores. They are used to inoculate substrates with a selected mushroom species that will go on to become a  beautiful colony of mushrooms one day if cultivated successfully. Mushroom spore syringes can be bought online or made in your own home from commercially obtained or home-grown mushroom spawn, from a trusted retailer of course. The main reason as to why psilocybin mushroom spores are hydrated in water is because dry spores are more susceptible to contamination. When making syringes at home, that quantity that can be made depends on the size and density of the spore print used to make from. While small or pale prints may only make a few syringes, large and darker prints can make upwards of 25 or more.

“Except as otherwise authorized by law, every person who, with intent to produce a controlled substance specified in paragraph (18) or (19) of subdivision (d) of Section 11054, cultivates any spores or mycelium capable of producing mushrooms or other material which contains such a controlled substance shall be punished by imprisonment in the county jail for a period of not more than one year or in the state prison.”

One very exciting prospect and look into the future is the recent legalization of psilocybin in the state of Oregon, official in January 2021. With more and more growing interest in magic mushrooms (or those that contain the psychedelic psilocybin) and their use in mental health and medicine, who knows what the future holds!

Where To Buy Psilocybin Mushroom Spores

When looking where to buy psilocybin mushroom spores, the easiest way is to order them online from a reputable source. Typically they are sold in a spore syringe, which again are spores suspended in a sterile aqueous solution, or as a spore print. When buying online, make sure to look for some basic but fundamental services the retailer can provide. Such services should include: popular species of psilocybin mushroom spores (such as Golden Teacher, Penis Envy for example), discreet and professional shipping options with order tracking and reliable delivery, informative staff members, and of course excellent customer service available at any time. By narrowing down a potential psilocybin mushroom spores retailer to those that provide premium options, you are most likely saving yourself time, money, and energy in the long run. Not to mention risking less in the safety of knowing exactly which mushrooms you are buying and receiving. Only a reliable and reputable source for spores will ensure you receive a quality product in a professional way that ensures you come back time and time again.

Magic mushrooms are one of the most widely used recreational psychotropic drugs because they can be found in the wild or grown fairly easily and inexpensively. Psilocybin mushroom spores are also considered to be one of the easiest to grow, considering a quality psilocybin grow kit is used. But as with anything hard to find mainstream, price can differentiate until the supply and demand is more even. When looking where to buy psilocybin mushroom spores in the US, the cost can range with an average of $15-$20. In buying psilocybin mushroom spores (the mycological equivalent to cannabis seeds) and with the right know-how and a few easily sourced (or, indeed, home-built) pieces of equipment, you could potentially produce well over 100 times the amount of mushrooms you could buy for the same price of buying the actual mushrooms themselves.

What Is Found Within A Psilocybin Mushroom Spores Grow Kit

Although buying psilocybin mushroom spores to use at home may sound intimidating, with some basic knowledge the process is fairly simple. Using a grow kit with psilocybin mushroom spores to grow your own mushrooms can save both money and hassle for a consumer. But what is found exactly within a  grow kit? It’s typical to find three basic things inside of a psilocybin grow kit: substratum containing living mycelium of the P. Cubensis (spores that have been developed), transparent grow bag with an air filter, and two paper clips. The mushroom substrate in a psilocybin grow kit consists of rye, vermiculite and perlite. Using a grow kit provides benefits because the development of the cubensis spores into the mycelium has already been done in a sterile laboratory. The mushrooms have not yet grown inside the kit because the mycelium is in a hibernation stage due to the cold environment. Trusted and reputable sources for grow kits is a great choice in where to buy psilocybin mushroom spores. And remember, before buying anything, make sure to do research on the legalities of doing so in the area in which you live.