What Are Psilocybin Mushrooms?

What Are Psilocybin Mushrooms? 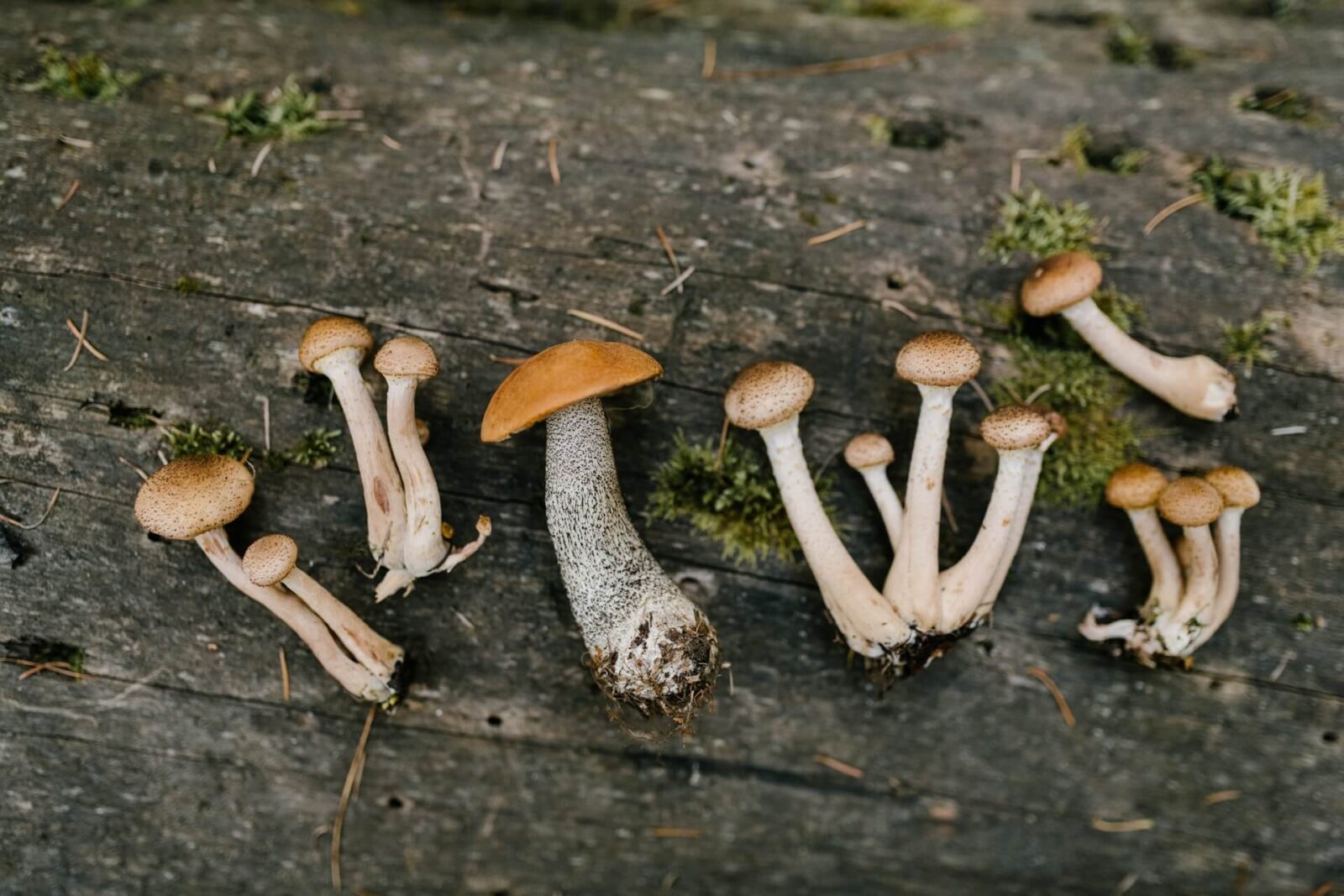 It’s no surprise that psilocybin mushrooms have become a popular topic in conversation these days. Although the history of psilocybin mushrooms is limited, more and more information has become available about these magical mushrooms. With more interest and studies underway, these magical mushrooms are proving to be a strong consideration for those seeking help emotionally and psychologically. Especially for those who are more inclined to try natural alternatives, rather than pharmaceutical options. Psilocybin mushrooms are complex, mystical, and certainly deserve the attention they are receiving today.

How Long Have Mushrooms Been Around?

Fungi, or more commonly called mushrooms, have flourished and existed on our beautiful Earth for quite some time. Although researchers are still looking into this query, it is estimated that psilocybin mushrooms have possibly existed for more than 2 billion years! And over that time period, they have developed some impressive evolutions, including many that can either be considered fascinating or frightening. Mushrooms and their magical family members are complex, wonderful examples of Mother Nature and her exquisite ability to adapt and evolve. Some ancient mushrooms grew nearly 30 feet (9 meters) tall before trees existed. For example, a honey fungus that still grows today in Oregon may be the largest organism on the planet, spanning an area of about 400 acres! Oregon scientists studying this particular organism estimate that If you scooped it all up and piled it together, it could weigh at least 7,500 tons and maybe up to 35,000 tons. It is astounding to think that this particular honey fungus is aged anywhere from 2,000-to-8,000 years old! Mushrooms have evolved and changed into their own unique features, some that definitely set them apart from each other. For example, there are mushrooms that can glow in the dark, some that turn insects into zombies, all with a variance of toxicity. Some species are lethal to humans, while others provide us with valuable superfoods. Mushrooms have been mentioned and referenced throughout our history of civilization thru ancient cave paintings, manuscripts, and constructs. They continue to be referenced in pop culture, music, movies, and many books.

What Are Magical Mushrooms or Psilocybin Mushrooms?

So what characteristics qualify a particular mushroom to be considered “magical”? For the most part, mushrooms containing psilocybin are most commonly known as “magic mushrooms”. These types of mushrooms are among the oldest recreational drugs that human beings have ever used, and what is even more amazing is that they are still actively used today! “Magic mushrooms” are often small, and are usually color shades ranging between brown and tan, to a golden beige. At first glance magical mushrooms, or Psilocybe Cubensis by their scientific name, do not look particularly magical. In fact, the scientific name of this little brown-and-white mushroom roughly translates to “bald head,” befitting the mushrooms’ rather plain-looking appearance. But those who have ingested a dose of Psilocybe Cubensis say it changes the user’s world completely. Psilocybin is most commonly found in wild or homegrown mushrooms, and sold either fresh or dried. In the wild, people commonly mistake magic mushrooms containing psilocybin for any number of other mushrooms that are poisonous. Hence the importance of becoming knowledgeable about mushrooms, as well as being able to properly identify them.

Did you know that there are over one hundred and eighty different species of psilocybin containing magic mushrooms? Latin America and the Caribbean are home to more than 50 species, and Mexico alone has 53. There are 22 species of magic mushrooms in North America, 16 in Europe, 19 in Australia and the Pacific island region, 15 in Asia, and a mere four in Africa. These diverse fungi hail from roughly a dozen genera, but are often lumped together as “psilocybin mushrooms.” Most belong to the genus Psilocybe, including well-known species like P. Cubensis (Gold Top) and P. Semilanceata (Liberty Cap). Psilocybin mushrooms might be so diverse, according to a study in Evolution Letters, because they didn’t inherit the genes behind psilocybin from a common ancestor. Instead they passed them directly among distant species in a phenomenon called “horizontal gene transfer.” Some study authors suggest that psilocybin could have originally evolved as a defense mechanism. Therefore deterring fungi-eating pests by “altering their mind” enabling the fungi species to survive. This particular characteristic could explain the mushrooms’ unique make-up that makes it psychedelic when ingested. Remember, caution should always be exercised when consuming any psilocybin mushrooms.

The other group of magic mushrooms is considerably smaller, but has a rich history of religious use in the history of our humanity. It consists of one iconic species Amanita Muscaria (think the Mario Brothers Game mushroom), and a few less famous relatives like Amanita Pantherina (Panther Cap). Instead of psilocybin or psilocin, its main hallucinogens are chemicals known as muscimol and ibotenic acid. These “muscimol mushrooms” are related to some notoriously toxic fungi, namely Amanita Phalloides (Death Cap) and Amanita Ocreata (Destroying Angel). They’re generally less poisonous than those killer cousins, but given the high stakes of a mushroom mix-up, non-experts are advised to steer clear of Amanita varieties altogether.

Psilocybin is a hallucinogenic substance found in various types of mushrooms that grow in regions of Europe, South America, Mexico, and the United States. Psilocybin and psilocin are the two major psychoactive substances which naturally occur in psychedelic mushrooms (or magic mushrooms). Psilocin is biologically active, whereas psilocybin is a psilocin pro-drug, meaning that it is converted into psilocin when ingested via dephosphorylation. Psilocybin is metabolized mostly in the liver. As it becomes converted to psilocin, it undergoes a first-pass effect, whereby its concentration is greatly reduced before it reaches the systemic circulation. Psilocin is broken down by the enzyme monoamine oxidase to produce several metabolites that can circulate in the blood plasma. Some psilocin is not broken down by enzymes and instead forms a glucuronide; this is a biochemical mechanism animals use to eliminate toxic substances by linking them with glucuronic acid, which can then be excreted in the urine. Based on studies using animals, about 50% of ingested psilocybin is absorbed through the stomach and intestine. Within 24 hours, about 65% of the absorbed psilocybin is excreted into the urine, and a further 15–20% is excreted in the bile and feces. Although most of the remaining drug is eliminated in this way within 8 hours, it is still detectable in the urine after 7 days.

Because psilocybin is the main ingredient found in several types of psychoactive mushrooms, it is perhaps the best-known naturally-occurring psychedelic drug. After the gut digests and absorbs these particular “magic mushrooms”, the body converts it to psilocybin. The hallucinogenic effects of psilocybin usually occur within 30 minutes of ingestion and can last between 4 and 6 hours. Keep in mind though, each person will be affected differently based on the factors named above. In some individuals, the changes in sensory perception and thought patterns can last for several days if not months. Psilocybin is a hallucinogen that works by activating serotonin receptors, most often in the prefrontal cortex. This particular part of the brain affects mood, cognition, and perception for people.

It is also important to note that hallucinogens work in other regions of the brain that regulate arousal and panic responses. Psilocybin does not always cause active visual or auditory hallucinations. Instead, it distorts how some people that use psilocybin perceive objects and people already in their environment. Factors such as the amount of ingested mushrooms, personal past experiences, and expectations of how the experience will take shape, can therefore all impact the effects of psilocybin. Psilocybin is about 100 times less potent than LSD on a weight per weight basis, and the physiological effects last about half as long. Some recent research is not only suggesting, but proving, that magical mushrooms (those containing psilocybin) may have beneficial medicinal properties as well.

Why Psilocybin Mushrooms Are Making Headlines

With psilocybin mushrooms becoming more and more of a popular topic in today’s social and medical communities, new research is becoming available. Psilocybin mushrooms have been found to have minimal harmful effects and could potentially benefit those who suffer from severe depression, anxiety, or other psychological conditions. Unfortunately, they remain illegal even though they offer a groundbreaking alternative to several under-treated psychological ailments. Nevertheless, psychedelics are currently riding a wave of positive momentum brought on by wider acceptance and cannabis legalization in more states. As studies go underway more and more each year, the prospects of psilocybin mushrooms being approved as a pharmaceutical drug become realized.

In fact, two new studies confirm the hypothesis that psilocybin found in “magic mushrooms” may be a useful new treatment for depression, while avoiding some of the side effects of conventional antidepressants. A new study — which was carried out by researchers at Imperial College London (ICL) in the United Kingdom — suggests that psilocybin mushrooms could treat depression while avoiding these harmful or negative side effects. The new research consists of two studies, both of which were led by Leor Roseman, a member of the Psychedelic Research Group at ICL. Using functional MRI (fMRI), the team scanned the brains of the participants while they looked at pictures of emotive expressions. The scans were taken before and after each drug intervention. The functional MRI scans revealed a stronger brain response to emotive faces. Specifically, the scientists saw more activity in the brain’s amygdala, which is an emotion-processing area associated with depression. In order to assess the impact of the treatment on depression, the subjects were all provided with psychological support before, during, and after the intervention. After the treatment, the participants reported feeling better, “emotionally re-connected, and accepting.”

Psilocybin Mushrooms And The Brain

Many different species of the psilocybin mushrooms or “magic mushrooms” also contain a range of tryptophan-derived beta-carbolines. Ones such as harmane and harmine, that may also positively influence brain function. So, why are the beta-carbolines important in the action of psilocybin mushrooms? Beta-carbolines are potent inhibitors of an enzyme called monoamine oxidase, which is responsible for the inactivation of psilocin. This is fascinating behavior by any plant or fungus. The Psilocybe produces a variety of different natural products via unique pathways that diverge from the same building block, i.e., tryptophan, leading to the production of dissimilar compounds, and all of these contribute directly or indirectly to the same pharmacological effects.

Some recent PET evidence suggests that psilocin’s psychoactive actions depend upon its ability to stimulate one specific serotonin receptor called 5HT2A. To date, psilocybin has demonstrated modest to promising results in clinical trials for the treatment of addiction, depression, post-traumatic stress disorder, and death anxiety. Researchers find that the psychoactive compound in mushrooms may be helpful for patients with severe depression who did not respond to conventional therapy. Discussions are on-going about whether psychological specialists can use psilocybin and similar hallucinogens as a treatment for depression. For the second time in a year, the U.S. Food and Drug Administration (FDA) has designated psilocybin therapy, which is currently being tested in clinical trials, as “breakthrough therapy”. An action that is meant to accelerate the typically sluggish process of drug development and review. It is typically requested by a drug company and granted only when preliminary evidence suggests the drug may be an enormous improvement over already available therapy, according to the FDA.