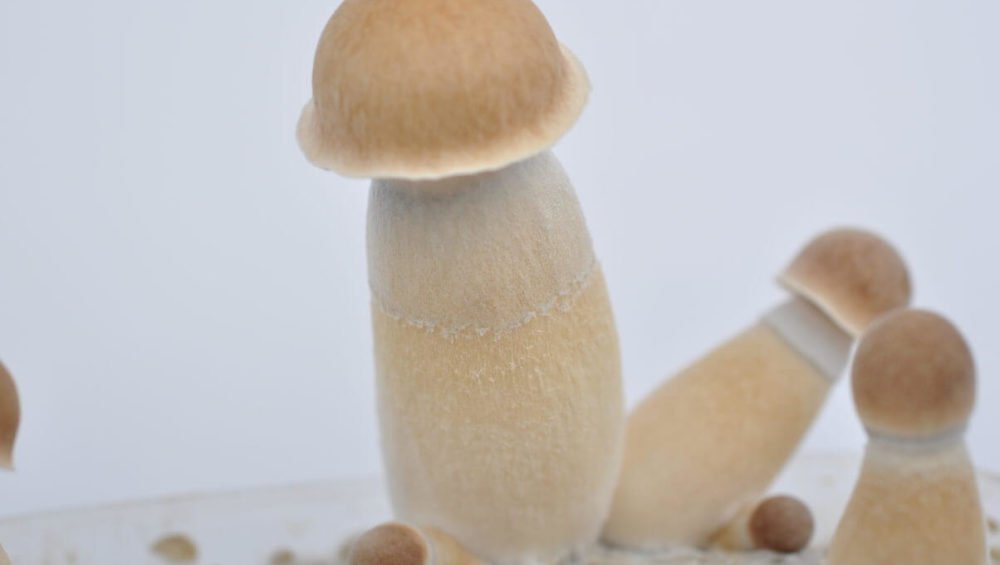 With all the popularity gaining around psilocybin mushrooms, or magic mushrooms have you, there is one particular strain with the most intriguing name of all. The Penis Envy Mushroom.

Interestingly enough, the first thought for some people when they hear of this strain is that it perhaps has some sort of magical qualities for male performance. But in fact, this is not the case. Characterized by their strange appearance, having a dense, bulbous, and wrinkly stipe, these mushrooms are named for their resemblance to… you guessed it, the male penis. But besides their appearance, a Penis Envy Mushroom strain review reveals there are much more unique aspects to them. For starters, their spore release is dramatically much less than their cousins. Despite its spore drop challenges, it is an aggressive fruiter, producing some monsters in later flushes as reported. This particular strain is well known for its high psilocybin content, and has also been reported as easy to grow from home as well. Be aware, however, that psilocybin mushrooms are considered a Schedule I drug in the United States, and are not legal for personal use cultivation. Also, their origin is still much of a mystery, and largely debated amongst mushroom enthusiasts making them even cooler. All we can say is that any valid information about the Penis Envy Mushroom strain is always worth a gander.

The Mysterious Origin Of The Penis Envy Mushroom Strain

The Famous Appearance Of The Penis Envy Mushroom

This may come as no surprise, but yes, these mushrooms get their name from the fact that they do indeed look like the male reproductive organ. Characterized by their strange appearance, with a dense and wrinkly stipe, these mushrooms often are on the larger size of the spectrum. They are typically thick, gnarly stemmed mushrooms with a bulbous cap that only sometimes separates from the stem. At least that is what is observed with the true genetics of the Penis Envy Mushroom Strain review. Again, for purposes of identification, their bulbous cap may or may not open up and separate from the usually very thick stem. As far as their color, Penis Envy Mushroom strains typically range from a light tan to darker brown, with more variations amongst varieties. Blue bruising seen on the stem can be an indication of high psilocybin content as well. They also possess unique characteristics like an underdeveloped cap and often the lack of a velum (veil) separating cap and stem. This unique characteristic which results in light and sometimes ineffective sporulation can make them more difficult to cultivate. Penis Envy mushrooms are also one of the densest varieties of magic mushrooms, and while they are typically shorter in height and smaller overall than other species, they still possess significant weight due to their density.

Why “Rare” Comes Up In A Penis Envy Mushrooms Strain Review

Although microscopic in size, mushroom spores give us the blueprint for all mushroom growth. Or in other words, the spore of a mushroom contains all of the necessary materials to form a brand new fungus. A mature mushroom is said to contain up to 16 billion spores, giving Mother Nature and cultivators plenty of opportunities to propagate more. In Mother Nature, when the spores of a mushroom are released they often travel a certain distance before they land. The single cell then sends out hyphae (each of the branching filaments that make up the mycelium of a fungus) to help establish and gather food for the actual mushroom. After the spore has sent out its hyphae, they will eventually meet up with the hyphae of another mushroom. After the sexual process of reproduction has begun, the mushroom forms the structures of a “fruiting body” that will eventually produce and disperse spores. Not only are mushroom spores beautiful when captured, but necessary for successful and legal cultivation. As for Penis Envy Mushroom spores though, the difficulty-barrier along with the intensified experience that this variety provides has made them more desirable and rare.

Unlike what some people claim or believe, the spores of the Penis Envy Mushroom strain do in fact look the same as the cubensis strain. As with all mushrooms, spore size, color, and shape are all very similar. In fact, even under a microscope an observer may not be able to see any differences between Penis Envy Mushroom spores and their cousins. But what sets the Penis Envy Mushroom strain review apart from others is their spores. Penis Envy Mushrooms do not open up their fruiting body cap in the same way for spore release as others do so freely. Making spore collection far more difficult than their P. Cubensis cousins, creating an even more rare situation. This mostly is their only downside as it is hard to collect spores, as less than five percent of the mushrooms drop spores. Collection can be done, however, as an alternate method is used where the person must swab the gills with a sterile q-tip. Ensuring you receive reliable and reputable information about Penis Envy Mushrooms strain and their spores from a trusted source is crucial. Make sure to choose a high quality source, such as FungusHead, for all your questions, needs, and concerns.

​Trans Envy Mushroom Strain – a variety that have been isolated by a mushroom spore vendor named ‘Spores Lab’. They appear closer to a Transkei Magic Mushroom in appearance, with slender yellow-white stems and medium sized caps. This variety is also slightly less potent than other Penis Envy varieties.

Interestingly enough, psilocybin mushrooms are the most commonly used psychedelics among people ages 34 and younger. And a 2012 study of 409 university students in the American northeast found that nearly 30% of those surveyed had tried mushrooms at least once. And amongst mushroom and psilocybin enthusiasts, the Penis Envy Mushroom is an absolute winner for most. The Penis Envy Mushroom strain is known as the most potent Psilocybe Cubensis magic mushroom variety. Unfortunately though, due to the current legality of psilocybin containing mushrooms, there are no publicly accessible test results to confirm exactly how much more potent this variety is. Nor the differing ratios of psychotropic compounds that are present in Penis Envy Mushroom strain varieties, in addition to higher concentrations. Effects felt from this strain can include vivid visual stimulation, intense feelings of euphoria, deep introspection, philosophical thoughts, tremendous joy, distortion of space and time, synesthesia (ie. hearing colors, seeing sounds), ‘mystical’ or spiritual feelings of connectedness to the universe, and even out of body experiences. In fact, those who have tried psilocybin mushrooms and have experienced Penis Envy Mushroom strain effects have reported feeling:

For most, Penis Envy Mushroom strain effects will have you experience level 4-5 trips that take you to a different dimension for hours. A report from data collected in the 2010 NSDUH study show that, compared to other drugs, hallucinogens — which, according the NSDUH, includes LSD, PCP, peyote, mescaline, psilocybin mushrooms, and MDMA (ecstasy) — were used by about 1.2% of the population of people 12 years of age and older within the past month. Interestingly too, prescription “psychotherapeutics” are reportedly used illegally at a rate nearly 6 times that of hallucinogens. With new data and revelations being made, there is still much to learn about the potential healing effects attributed to psilocybin mushrooms. Such as those found in the Penis Envy Mushroom strain review.